Silents, Please! is the Somerville Theatre’s series of vintage silent classics shown on the big screen with live music. All films in the series will be shown using 35mm prints, with most on loan from the U.S. Library of Congress. 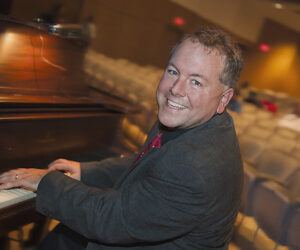 In the tradition of theatre organists of the 1920s, Rapsis improvises each film’s score on the spot, making up the music as the movie is screened.

We salute Black History Month with a screening of ‘Within Our Gates’ (1920), the landmark drama from pioneer African-American filmmaker Oscar Micheaux. The plot features an African-American woman who goes North in an effort to raise money for a rural school in the Deep South for poor black children. Her romance with a black doctor eventually leads to revelations about her family’s past and her own mixed-race, European ancestry.

Two Keaton classics in which Buster creates large-scale comedy with big machines. In ‘Steamboat Bill, Jr.‘ (1928), Buster plays the effete college-educated son of a rough-hewn riverboat captain who must help his father fight a domineering businessman—who just happens to be the father of Buster’s girlfriend. In ‘The General‘ (1926), Buster’s Civil War-era masterpiece tells the story of a Confederate railroad engineer whose train is hijacked by Northern spies.

To mark “Canada Day” (July 1), we salute our neighbors with a double helping of vintage cinema set north of the border. In ‘Mantrap‘ (1926), silent-era “It” girl Clara Bow stars in a battle-of-the-sexes comedy about a big city divorce lawyer hoping to get away from it all at a Canadian wilderness retreat. ‘The Canadian‘ (1926) stars Thomas Meighan in the tale of a pioneering couple homesteading in Alberta, where they battle bad weather and financial woes.

MGM’s 1926 blockbuster production stars Charles Ray as the youngest in a long line of fearless Irish American firefighters. Things get complicated when he falls in love with the daughter (May McEvoy) of a crooked building contractor. Spectacular fire sequences with hand-colored effects included in this recent Library of Congress restoration.

‘The Big Parade‘ (1925) starring John Gilbert, Renée Adoree. We salute Veterans Day with this sweeping saga about U.S. doughboys signing up and shipping off to France in 1917, where they face experiences that will change their lives forever—if they return. MGM blockbuster directed by King Vidor; one of the biggest box office triumphs of the silent era.