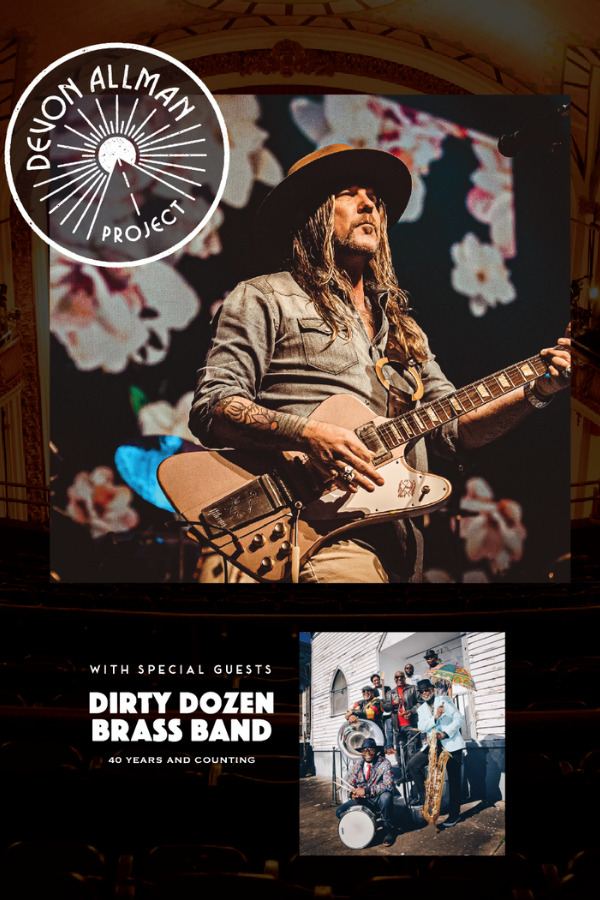 NOTE: THIS SHOW WILL NOW TAKE PLACE ON JUNE 7th at 8PM at the CRYSTAL BALLROOM AT SOMERVILLE THEATRE.

Tickets purchased for the original show (on June 3rd at the Somerville Theatre) will be honored for this rescheduled performance.

The Devon Allman Project is a six piece world-class band that has previously toured almost 20 countries. Playing the Peach Festival, Rock Legends Cruise and festivals in Europe and coast to coast in the USA. It is led by Blues Music Award winning Devon Allman and features the two Allman Betts Band drummers, bass, Hammond B3 organ and piano and another guitarist.

They will be playing songs of The Allman Brothers and Gregg Allman in their set as well as Devon’s fan favorite originals and surprise covers.

Formed in 1977, The Dirty Dozen Brass Band are the pioneers of the modern New Orleans brass band movement, recognized worldwide as an unstoppable musical machine whose name is synonymous with genre bending romps and high octane performances. They have been featured guests both in the studio and on stage with artists including Elvis Costello, Dr. John, Widespread Panic, Modest Mouse, Dave Matthews Band, The Black Crowes and many others.