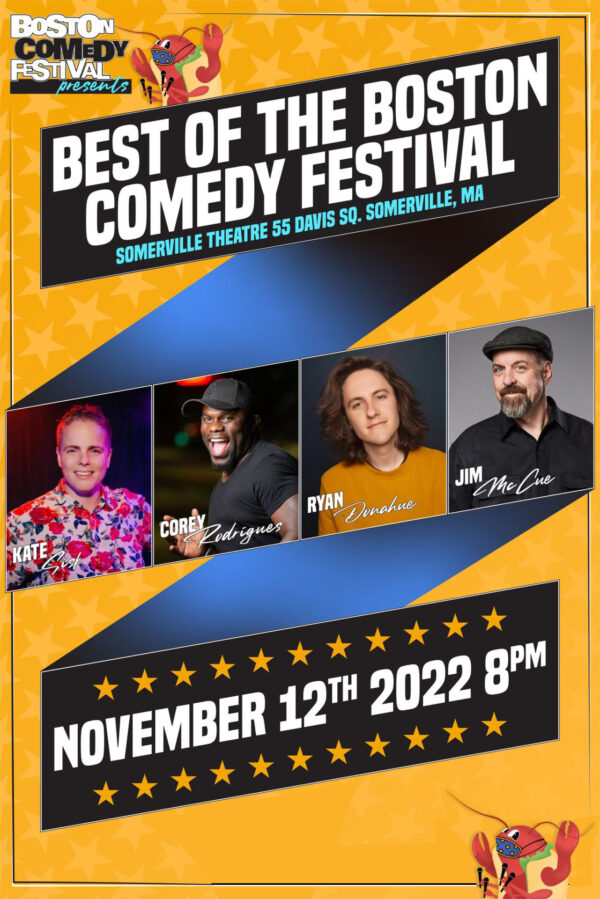 Join us for night after night of side-splitting fun!

Corey Rodrigues is a highly sought-after national touring college, club, and corporate performer. The Funniest Comic in New England and the 2017 Big Sky Comedy Festivals. Rodrigues has been featured on the hilarious Gotham Live, Laughs on Fox, and True Tv’s Laff Mobbs Laff Tracks. In 2018 he released his Dry Bar Comedy special, was voted “best of the fest” at the Big Pine Comedy Festival, and in 2019 Rodrigues made his late-night TV debut on the Conan O’Brien show.

Jim McCue went viral this year with his DryBar special “nothing personal” which has had over 4 million views, Jim has been featured on Comedy Central, Comcast Comedy Spotlight, NBC’s “Last Comic Standing,” RedEye on Fox News, and Live at Gotham AXS.

Kate Sisk (she/they/he) is a professional stand-up comedian, amateur drag king, and retired soccer player from Massachusetts. Based in Brooklyn, New York, Kate is an alumnus of UCB’s Harold Night, a contributing writer for The Onion, and a recent participant in the NBC Late Night Writers Workshop. Kate’s stand-up comedy about life as a gender-nonconforming person and former member of the Puerto Rico Women’s National Soccer Team has earned Kate appearances in the HBO Women In Comedy Festival and the Finals of the Boston Comedy Festival.

Ryan Donahue is a comedian, actor, and writer based in NYC. After making his network television debut on Jimmy Kimmel Live!, he’s made multiple appearances on HBO’s Crashing and Pause with Sam Jay, where he is also a staff writer.