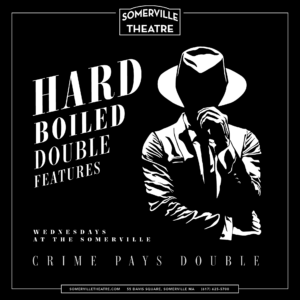 According to my research, the term “hard-boiled” was first used in a non-dairy context by Mark Twain in 1886, to describe compassionless and otherwise emotionally callous characters. I picked the pictures in this series, in part, because it feels like crime stories these days have been shunted off into interminable podcasts, or worse – prestige television miniseries that drag out for ten hours when they should have been 90-minute movies. But mostly I chose them because I miss dames and doomed private dicks and one-last-jobs that inevitably fall apart. As such stories go, I feel like the ideal format corresponds to English philosopher Thomas Hobbes’ description of life as “nasty, brutish and short.” I think you’ll agree these fourteen films fit the bill.
– Sean Burns, film critic and series curator

Last year, film critic Gerry Peary was conducting a poll of the ten best film noirs ever made. Being notoriously terrible at making lists, I told him to just write down Touch of Evil ten times for me. Orson Welles’ gloriously baroque return to Hollywood after a decade in European exile isn’t just his most fun movie, it’s the most movie of all his movies, wallowing in an overtly theatrical, go-for-broke showmanship that elevates the tawdry B-picture plot into something like the Sistine Chapel of crime pictures. I’m one of those guys who likes Touch of Evil better than Citizen Kane because it’s bigger and it’s sleazier, and it’s tawdrier and it’s weird. And in the final scene that tinkling player-piano music and Marlene Dietrich take me to a place of great sadness and regret. “Adios.”

Finally, the only way this series could possibly end is by pivoting from Welles’ most ridiculously ornate noir to the all-time grubbiest, most low-rent picture ever. Director Edgar G. Ulmer’s Poverty Row masterpiece Detour barely lasts an hour and it’s always the leanest and meanest of any movie programmed alongside it. Cold blooded and vicious, it has the dopiest hero (Tom Neal) the mangiest femme fatale (Ann Savage) and comes up so quickly on audiences who were brought up thinking that when the lights go down things are gonna be okay. They’re not.

Sean Burns is the film critic for WBUR’s The ARTery and a contributing writer at North Shore Movies and Crooked Marquee. He was Philadelphia Weekly’s lead film critic from 1999 through 2013, and worked as the movies section contributing editor at The Improper Bostonian from 2006 until 2014. His reviews, interviews and essays have also appeared in Metro, The Village Voice, Rolling Stone, The Boston Herald, Nashville Scene, Time Out New York, Philadelphia City Paper and RogerEbert.com.

A graduate of New York University’s Tisch School of the Arts, Burns was a recurring guest on the late David Brudnoy’s WBZ 1030 AM radio show, and in 2002 received an award for Excellence in Criticism from the Greater Philadelphia Society of Professional Journalists.