The Somerville Theatre, part of the Hobbs Building in the heart of Davis Square, was designed by the firm of Funk & Wilcox of Boston and built in 1914 by Joseph Hobbs. Designed for stage shows, vaudeville, opera, and that new fad – motion pictures – the theatre was only one of the Hobbs Building attractions, which also included a basement café; bowling alley and billiards hall; ten ground floor storefronts; and the Hobbs Crystal Ballroom on the second floor. The second and third floors also contained leased office space. The cost to build the Hobbs Building was $200,000.

The theatre opened its doors for the first time on May 11, 1914. The opening program featured a music and dance act – The Stewart Sisters; a comedy playlet by the Fuller-Rose company called “A King For A Day;” a singing skit by the Adairs; and “The Inventor’s Wife” – a two-reel film presentation.

In 1915, the Somerville Theatre Players began their stock company presentation of weekly play performances to complement the film and vaudeville presentations. Among the notable players who “came up” at the Somerville were Tallulah Bankhead, Kay Corbett, and Francis X. Bushman. Future film director Busby Berkeley – famous for “42nd Street” and other stylized 30’s musicals – directed many shows there in the mid-20’s, and actor Ray Bolger – well-known today as the Scarecrow in the immortal M-G-M film, “The Wizard of Oz” – also danced on the stage. 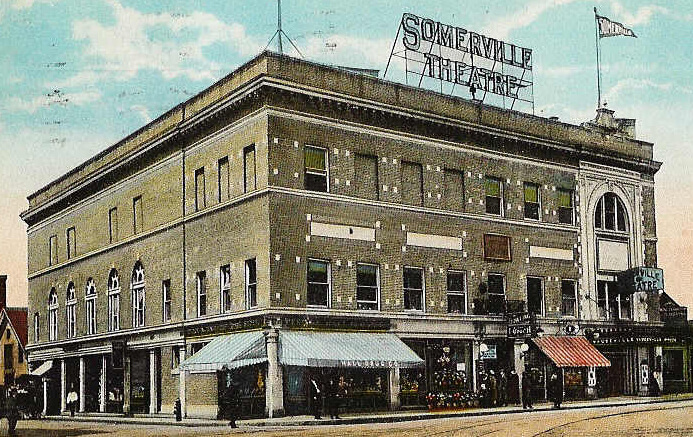 In 1926, the Hobbs family leased and subsequently sold the theatre to Arthur F. Viano, whose family built and owned other area theatres, such as the Teele Square Theatre, the Broadway Theatre in East Somerville, and the Regent Theatre in Arlington. The Vianos continued with the stock theatre company until the harsh economics of the Depression dictated a “movies only” policy in 1932. That same year, the theatre’s decor was “updated” with an art deco paint theme. 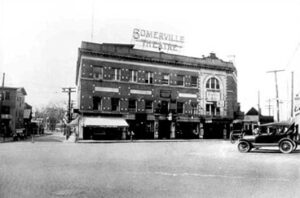 Throughout the 30’s, 40’s, 50’s and 60’s, the Somerville remained a prime neighborhood movie house. In those days, new films would open at the downtown theatres like the RKO Keith’s (now the Opera House) the Paramount, the Metropolitan (now the Citi Performance Center Wang Theatre), Loew’s Orpheum (now a concert hall) and Loew’s State (sadly demolished).

After playing downtown, the pictures made their way weekly – often two and three films per week – to the neighborhood houses like the Somerville Theatre. Like all Viano Theatres, the Somerville was well-known for its fresh popcorn, and also for gimmicky prize nights, usually weekdays, when dishware, appliances, and other merchandise were given away to boost patronage. These gift nights began in the Depression and lasted at the Somerville, amazingly, until the 1970’s.

The Viano family eventually took over operation of the Capitol Theatre in Arlington and by the 1970’s, the Somerville, Capitol, Regent, and Broadway Theatres were mainstays of local movie-going. The opening of the Sacks Assembly Square Cinema (later Loews) helped to kill the Broadway Theatre, and the Fresh Pond Drive-In was replaced by a multiplex, forcing the Cambridge-Somerville-Arlington neighborhood theatres to become strictly second run venues.

In 1982, the Viano family leased the Somerville Theatre to Garen Daly, who turned the theatre into a repertory house, running double features and daily changes and offering independent and off-beat fare in the days before video and DVD made it easy to track down such titles. Daly also brought back live performances to the stage for the first time since the 30’s when he began programming concerts to complement the film. During this period, the Hobbs Building was acquired by the Fraiman family, who had previously obtained the Capitol Theatre block in Arlington and took over operation of that theatre. In 1990, the Fraiman family’s F.E.I. Theatres assumed operation of the Somerville, and undertook long-overdue renovations, successfully preserving the theatre’s venerable architectural integrity.

Movie attendance, however, had dropped considerably, and something had to be done to keep the theatre competitive. The remainder of the Hobbs Building, with the exception of a couple of storefronts and the theatre, had been abandoned since the mid 80’s, and this unused space proved to be the answer. In 1996, construction began: the bowling alleys in the basement and a portion of the first floor retail space were gutted to create modern bathrooms and two new cinemas. Two more screens were built in the former ballroom space on the second floor. An elevator was installed, new windows and a bright stylish marquee were added, and the third and second floors were re-modeled as attractive office space. The theatre lobby was expanded by incorporating an adjacent storefront, and new seats were installed in the orchestra portion of the original auditorium. 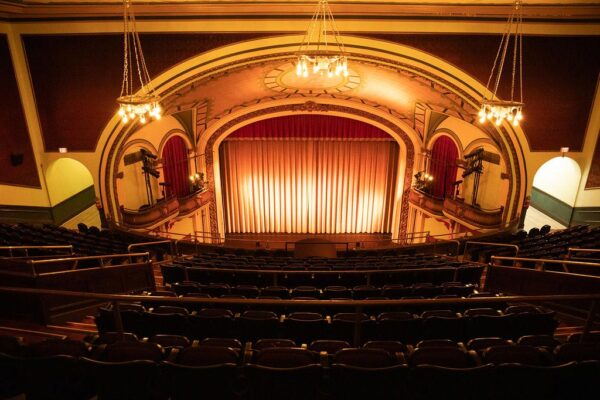 In 2007, the Somerville Theatre became one of the first venues in New England to offer beer and wine to film and event patrons.

In the summer of 2009, more renovations took place. The ageing balcony was repaired and all new seating replaced the originals still there from 1914. Dolby Digital Sound and 24 surround speakers were installed throughout the original auditorium. And a revamped projection booth containing two Norelco DP-70 projectors was installed, enabling the Somerville to be one of the few movie theatres in New England that can run 70mm film.

The theatre continues to host live events in addition to movies. In 2009, U2 chose the Somerville Theatre to perform in concert – perhaps the most famous booking in the history of the theatre. Bruce Springsteen did two solo acoustic shows performed in 2003. Among other notable names to have appeared on stage at the Somerville are Hunter S. Thompson, Maya Angelou, Joan Baez, Arlo Guthrie, Cheap Trick, Donovan, Kevin Spacey, Phish, Norah Jones, Adele, Nelly Furtado, Leonard Nimoy, Kevin Kline, Ben Kingsley, Billy Bragg, The Black Crowes, Guster, Tracey Chapman, and countless others.

Live theater has taken the stage in recent history as well, with shows like Faith Soloway’s “Miss Folk America” and “Jesus Has Two Mommies,” as well as community theater like Theatre@First’s “Never After,” and radio plays such as “The Big Broadcast of 1938.” The theatre is also home to the annual holiday burlesque extravaganza “The Slutcracker.” 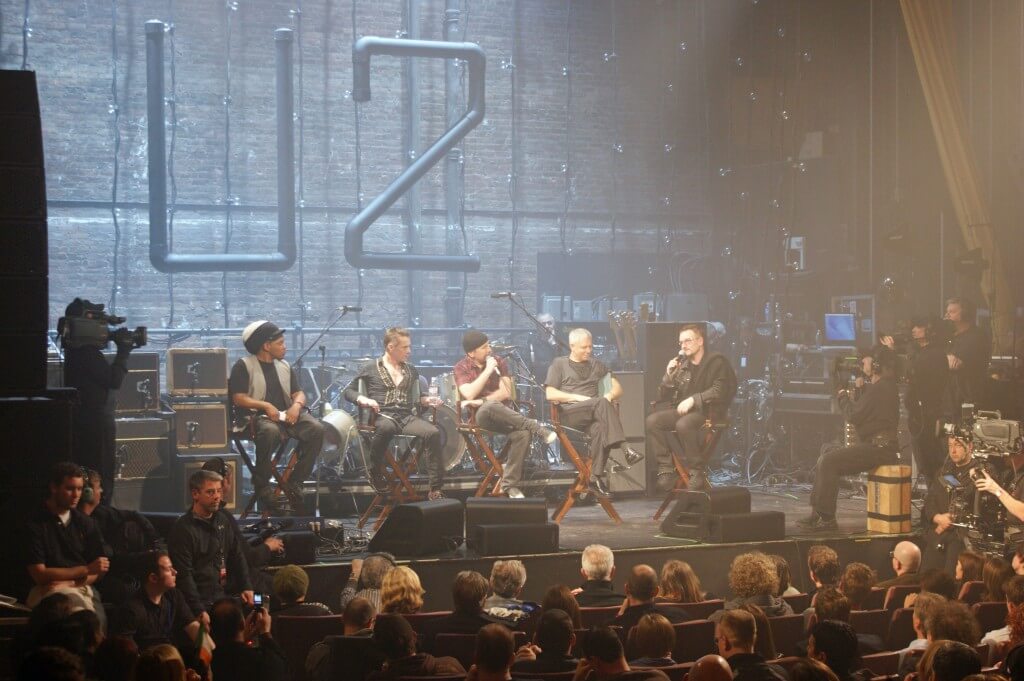 The theatre is also home to the annual Independent Film Festival of Boston, which hosts a dazzling assortment of film screenings, panel discussions, and special guests, as well as the Irish Film Festival, Boston – and screenings for the Boston Jewish Film Festival.

In 2018 the two cinemas in the basement level were completely rebuilt and upgraded, with all new seats, audio, and projection improvements.

In March 2020 along with virtually every other theater, the Somerville Theatre closed due to the Covid-19 pandemic. When what was initially believed to be a short closure was clearly extended for over a year, the Fraiman family decided to use the closure as an opportunity to complete further renovations; in a major project, the Crystal Ballroom on the second floor was rebuilt and opened in October 2021, while the theater lobbies and sales areas were completely updated and refreshed. Now with the classic main theater and two modern screening rooms remaining, and in fine form, the theater reopened in September 2021.

The Somerville Theatre continues doing what it set out to do since 1914 – provide the community with quality entertainment on stage and screen. It distinguishes itself from the large theater chains by offering lower prices; great popcorn and Richardson’s Ice Cream; a fine beer and wine assortment; a superior presentation with well-maintained projection equipment and a staff of union projectionists who take pride in their work; and a staff and management with local roots taking pride in its mission, and a passion for the remarkable place that is the Somerville Theatre.